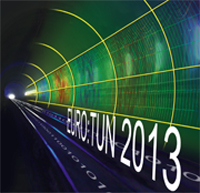 
EURO:TUN 2013 will be held at Ruhr University Bochum, Germany, on April 17th -19th, 2013. The conference aims to provide a forum for scientists, developers and engineers to review and discuss the latest advances in numerical models and computational methods and application concepts for the design, construction and maintenance of tunnels and underground facilities.

EURO:TUN 2013 is one of the Thematic Conferences of the European Community in Computational Methods in Applied Science (ECCOMAS).