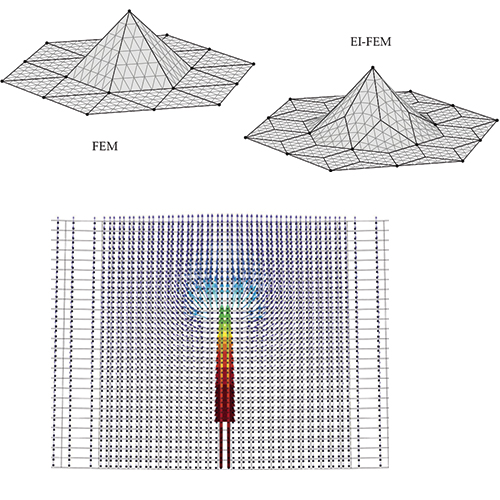 
The 8th European Solid Mechanics Conference will take place at the Grazer Congress, under the auspices of EUROMECH, during July 9-13, 2012.

The Institite for Structural Mechanics will participate in this conference with two presentations:

To improve the accuracy of the Finite Element Method (FEM), a smooth
approximation of the field-variables is proposed based on the use of
Edge-based Imbricate Finite Elements (EI-FEM). These elements are
characterized by the fact that the nodes supporting an element are not
all contained in the integration domain of the element, which enables
an improvement of the accuracy of a factor that can reach 10 for a
given triangular mesh, without sacrificing the standard concepts of
the FEM (iso-parametric representation, Gauss integration rules, ...).
The proposed EI-FEM can be linked to an existing method called
Edge-based Smoothed FEM (ES-FEM), which is based on the replacement of
the integration points by smoothing cells located at the edges of the
linear triangular elements of the mesh.

A two-scale Extended Finite Element modeling strategy is used, characterized by the superposition of the approximation for the moisture field at the macro scale with a local approximation along the crack, exploiting the local mass balance to obtain the macroscopic moisture flux across the crack. For the enrichment function for the pressure field at the crack, different approaches are investigated. A distance function and a novel formulation lead to a local increase of the capillary pressure at the discontinuity and representing an appropriate extension of the capillary pressure field for the simulation of transport processes across and along discontinuities.