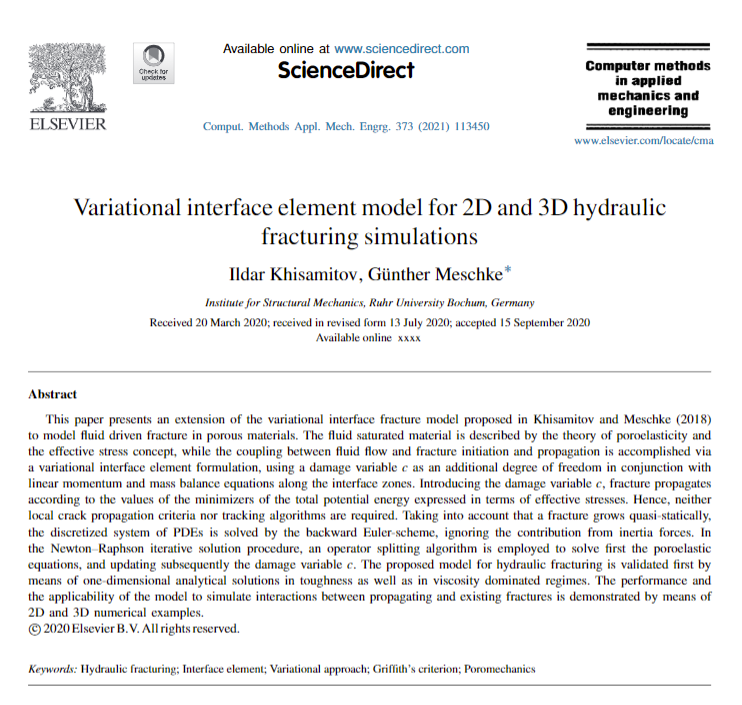 
A new paper with the title “Variational interface element model for 2D and 3D hydraulic fracturing simulations” has been published in the journal "Computer Methods in Applied Mechanics and Engineering".

Abstract
This paper presents an extension of the variational interface fracture model proposed in Khisamitov and Meschke (2018) to model fluid driven fracture in porous materials. The fluid saturated material is described by the theory of poroelasticity and the effective stress concept, while the coupling between fluid flow and fracture initiation and propagation is accomplished via a variational interface element formulation, using a damage variable as an additional degree of freedom in conjunction with linear momentum and mass balance equations along the interface zones. Introducing the damage variable , fracture propagates according to the values of the minimizers of the total potential energy expressed in terms of effective stresses. Hence, neither local crack propagation criteria nor tracking algorithms are required. Taking into account that a fracture grows quasi-statically, the discretized system of PDEs is solved by the backward Euler-scheme, ignoring the contribution from inertia forces. In the Newton–Raphson iterative solution procedure, an operator splitting algorithm is employed to solve first the poroelastic equations, and updating subsequently the damage variable. The proposed model for hydraulic fracturing is validated first by means of one-dimensional analytical solutions in toughness as well as in viscosity dominated regimes. The performance and the applicability of the model to simulate interactions between propagating and existing fractures is demonstrated by means of 2D and 3D numerical examples.