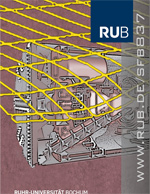 
Dr. Shuying Wang from Central South University, China will hold a guest lecture in the framework of SFB 837. The lecture is divided into two parts: Topic 1: 'Role of Soil Plasticity in Evaluating Clay Conditioning for EPB Tunnelling', Topic 2: 'Case Studies of Tunnel Projects with Big Challenges'.

Topic 1: Role of Soil Plasticity in Evaluating Clay Conditioning for EPB Tunnelling
Soil clogging occurred at the early construction stage of Nanchang Metro Line 1, China, when an earth balance pressure (EPB) shield passed through the argillaceous siltstone with a total content of clay minerals of 40.5%. To avoid the reappearance of soil clogging at the later stage, a new scheme was proposed to determine soil conditioning parameters, taking both slump value and liquidity index of soil into account. The scheme was applied successfully in the field.
The effect of dispersant on Atterberg limits of clays was investigated. The liquid limit and plasticity index of the clays decreased with an increase of dispersant content. The Zeta potentials with different dispersant contents were determined to analyze action mechanism of the dispersants. With the increase in dispersant content, the Zeta potential decreased continually (i.e. negative charge increased) in bentonite solution and tended to a lower constant in kaolinite solution. The mean barrier potential of clayey particles became higher with high dispersant rate, thus it was difficult for the clays to be agglomerated and easy to disperse.


Topic 2: Case Studies of Tunnel Projects with Big Challenges
Some tunnel projects with big challenges will be presented briefly. (1) A combination of sub-horizontal jet-grouted columns and pipe roof was proposed to reinforce weak ground before Jiangmen tunnel passing beneath a spillway for drainage of Yu-long Reservoir. As indicated in numerical simulation, the umbrella formed by jet-grouted columns works as a shell, and the pipes in the pipe roof behave as beams in the longitudinal direction of the tunnel. (2) The twin EPB shield tunnels in Changsha Metro Line 3 will pass nearly perpendicularly beneath Liuyang River Tunnel in Wu-Guang High-speed Railway Line. Centrifuge testing results were presented to show effect of the metro twin tunnels on Liuyang River tunnel. (3) The twin slurry shield tunnels, each with a diameter of 11.3 m, will pass beneath Qianjiang River in Hangzhou, China. The ground excavated by the shields is mainly composed of clay and silty clay, and so slurry separation will be a big problem for field construction. Second, the Qiantang River is famous of the strong tide, resulting in significant change of water level. Thus, the change of shield tunneling parameters such as slurry and grouting pressures with water level will be studied.