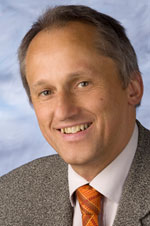 PROF. MESCHKE HAS BEEN APPOINTED TO THE AUSTRIAN SCIENCE BOARD


The Council of Ministers of the Austrian Federal Government has decided to appoint Prof. Dr. GÃ¼nther Meschke, Head of the Institute for Structural Mechanics at Ruhr University Bochum, to be a member of the Austrian Science Board as of 01.01.2016 for six years.

According to the press release of the Austrian Science Board, "Prof. GÃ¼nther Meschke, as an excellent exponent of modern engineering sciences, enjoys high international reputation. He is an expert for scientific policy, especially for comparing the situation in Austria with other countries."

At the turn of the year 2015/2016, the Austrian Science Board will be faced with far-reaching changes. At that time, the term of the current prominent chairmanship will end, which is very active concerning governmental policy on higher education. After the decision of the Austrian Council of Ministers July 7, 2015, the Austrian Science Board is pleased to announce, that the characteristics of his advisory activity, i.e. independence and scientific substantiality, will be guaranteed also in the future due to the appointment of excellent successors.

The Austrian Science Board advises both the Federal Minister and the universities, as well as advising the National Assembly and the regional assemblies about matters concerning the universities and generally on special questions of scientific policy and the arts. Taking into consideration European and international developments, the Science Board observes and analyses the Austrian university system and as well as the related academic systems and prepares recommendations for their further development.