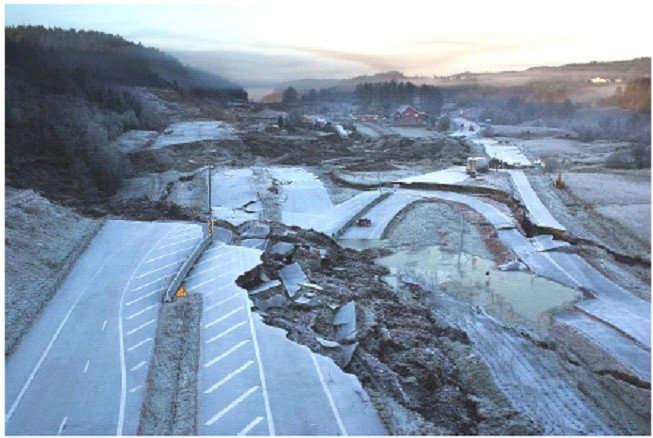 Numerical simulation of a progressive slide mechanism in a sensitive clay. The Smaaroed case from Sweeden December 2006


Prof. Steinar Nordal from Norwegian University of Science and Technology will hold a guest lecture in the framework of SFB 837 about "Numerical Simulation of a Progressive Slide Mechanism in a Sensitive Clay - The Smaaroed Case from Sweeden December 2006".

The lecture introduces porepressure based strength softening, as observed in Scandinavian soft, sensitive clays. The softening implies that, strictly speaking, a conventional limit equilibrium based slope stability analysis is not appropriate for a highly sensitive clay. A slide may develop in a progressive manner, passing peak strength at different times along a potential, long sliding surface. A traditional limit state based design may provide a safety factor larger than one for a slope that actually will fail.
The progressive failure mechanism is believed to play an important role for the quick clay slide that took place in Smaaroed in Sweden in December 2006. An investigation committee concluded that the slide was triggered by the construction of an embankment overloading the upper part of the slope. The slide then progressively developed 200 meter downslope. The constitutive model "NGI_ADPsoft"; is used in a finite element simulation order to incorporate the anisotropic strain hardening/softening behavior of the sensitive clay. A regularization method is implemented in order to remediate mesh dependency. The method involves non-local strains controlling the shear band thickness through an internal length. The FEM analysis of the Smaaroed slide is presented and demonstrates how local failure first develop under the embankment before the failure mechanism is then seen to gradually progress downslope, finally covering the area that actually failed in 2006. The results shed light on a discussion, currently going on in Norway, on how much safety factors must be increased to account for the effect of softening in a practical design if traditional limit equilibrium analysis is used for calculating the slope stability.