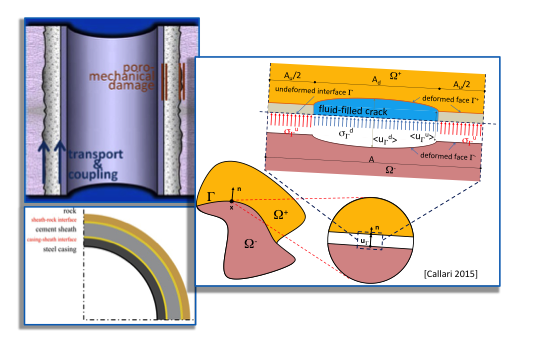 
Prof Carlo Callari from University of Molise, Italy will hold a guest lecture in the framework of SFB 837 about "Damage in pressurized interfaces of hydrocarbon wells".


In oil/gas wells, circumferential cracks are often observed at the two contacts of cement sheath with the casing and the rock, respectively. The corresponding formation of an annular gap at these interfaces (the so-called "micro-annulus") can be the main reason for upward leakage of fluids. In sites of CO2 storage or shale gas production, such a leakage can be an environmental issue of major concern, especially in presence of several abandoned wells. The upward propagation of debonding at well interfaces is often driven by the same fluid pressure, thus indicating the crucial role of the coupling between fluid flow and mechanical damage in the problem at hand. In view of these considerations, we present an interface poroelastic law to model fluid-induced damage. The new model is obtained from a penalized thermodynamic potential for porous interfaces, defined in terms of displacement jump and fluid pressure, and employing generalized poroelastic coefficients which depend on a damage internal variable. The coupled laws for traction and fluid content obtained from this potential are fully consistent with arguments using surface fractions and partial stresses. The rate of energy release resulting from differentiation of the interface potential with respect to damage is realistically dependent on fluid pressure. The considered damage criterion and the corresponding evolution law employ an available expression of damage resistance for dry interfaces. We assess the model ability in reproducing the main behavioural features of fluid-pressurized fractures in concrete. Furthermore, the proposed poroelastic damage model is contrasted with other laws for pressurized interfaces. The model is implemented in a formulation of the problem consisting of a well with displacement discontinuities and fluid pressures at interfaces. The semi-numerical solution of this problem is employed to simulate the effects on well integrity due to the combined action of fluid pressure, cement shrinkage, temperature variations and rock strain.