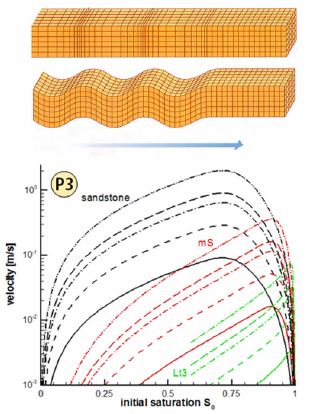 
"Wave Propagation in Partially Saturated Soils" is a lecture which will be presented by Mrs. Dr.-Ing. B. Albers.

If the pores of a porous medium are filled by two (or more) immiscible fluids, as for example, water and air, then they are called "partially saturated". The pore fluids possess different partial pressures, i.e. there exists a discontinuity in the pressure across the interface separating them. This difference is called capillary pressure. It depends on the geometry of the pore space, on the nature of the solids and and on the degree of saturation, i.e. the ratio of the volume occupied by one of the pore fluids over the entire pore volume.
In the lecture some aspects of the phenomenology and of the mechanical properties of such media are addressed. The modelling of three-component media will be described. A linear macroscopic model is introduced whose material parameters have to be determined from their measurable microscopic counterparts. The focus of the talk lies on the propagation of sound waves in partially saturated soils. The wave propagation analysis predicts the existence of four sound waves in partially saturated porous media - one transversal wave, S, and three compressional waves, P1, P2 and P3. Their acoustic properties are shown in dependence on frequency and degree of saturation. The P1-wave is mainly driven by the skeleton. At a high degree of saturation its speed increases up to the double of the value for other saturations. This phenomenon may be used for the development of nondestructive testing methods, e.g. to warn against landslides. The P2-wave shows a similar behavior to the sound wave in suspensions: its speed has a deep minimum in dependence on the saturation. The P3-wave only exists if at least two immiscible pore fluids occur. Its speed is attributed to the capillary pressure between the pore fluids.