Background
Prediction of a TBM’s performance, i.e. advance rate, cutting speed, penetration rate, etc., is crucial for an optimum operating speed and a safe construction process. Ultimately, the cutting forces at the individual disc cutters (mounted on the cutter head Fig.1a) govern the global performance of a TBM. Mixed or heterogeneous ground conditions refer to a tunnel face where two or more layers of rock or soil, having significantly different mechanical properties, are present (Fig. 1b). Mechanized tunneling in mixed ground conditions results in highly variable loads on the cutting discs. These varying loads can cause abnormal cutter wear which can lead to unexpected TBM stoppage.

Figure 1: (a) Cutter head of a tunnel boring machine (TBM) and (b) Illustration of mixed ground conditions at a tunnel face and an individual cutting disc.

Benchmarks
Peridynamic theory [1] is utilized to analyze the interaction of cutting disc of a Tunnel Boring Machine (TBM), working in mixed (heterogeneous) ground conditions. Peridynamic formulation, in contrast to classical continuum theory, does not contain spatial derivatives [1, 2], which makes it a preferable tool for modeling phenomena involving discontinuities, such as complex fracture and fragmentation processes [3, 4]. Peridynamic simulations were performed to validate benchmark experiments, such as the notched brazilean test and the compact tension (CT) test, as shown in Fig.2a and Fig.2b, respectively. 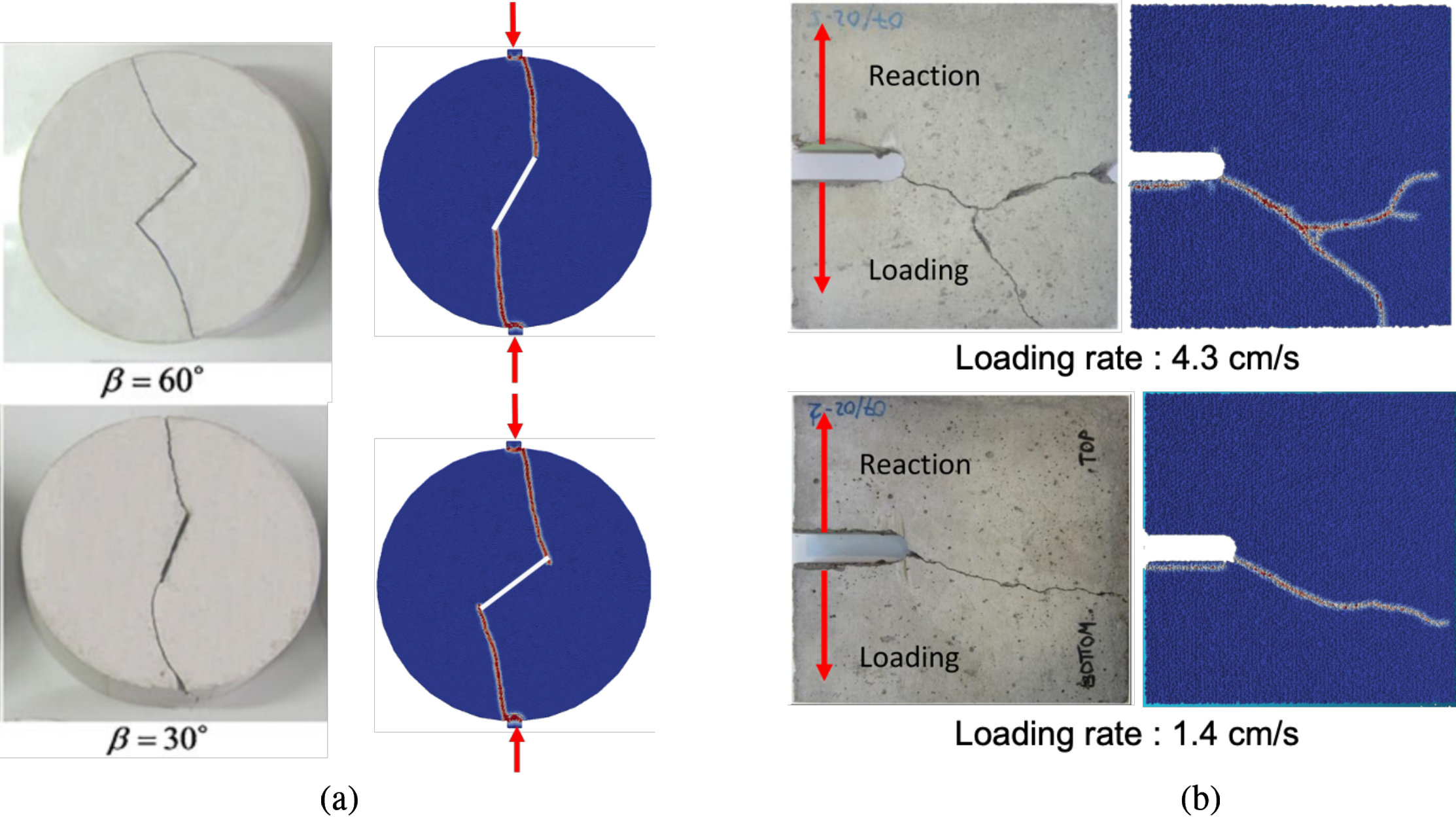 Excavation process in mixed ground conditions
Excavation process in mixed ground conditions is analyzed using simulations in which a cutting disc moves from a soft ground (soil, weathered rock, or soft rock) region into a hard rock region [9]. There is a sudden increase in the force on the cutting disc as it moves from a soft to hard ground, this abnormal peak in force is further investigated with respect to various tool penetrations. The cutting forces are further used to compute abrasive wear on the cutting disc. Fig. 4 presents the simulation results for the cutting disc moving from soil to rock material. Plastic deformations in the soil and the damage level in the rock is presented in Fig. 4b for a fixed penetration level. In Fig.4c, the reaction forces at the cutting disc are plotted against cutting distance. These figures show, that as the cutting disc reaches the soil-rock interface (cutting length = 0.05 m) and continues to move in the rock domain, the cutting forces shows a peak of relatively high cutter forces. This impulse load can cause excess vibration in the cutter head and increased fluctuations in torque and thrust of TBM. In addition, and more importantly, these peak loads may lead to excessive wear and can premature damage to the cutting disc. The model will be developed further to take into account the volume change due to localized wear ( Fig. 4a) caused to the disc due to this peak cutting load. In addition to that, different disc geometries, tool penetrations and cutting speeds will also be taken into account for these analyses in future research.

Figure 4: Peridynamic simulation of a cutting disc moving from soil to hard rock zone: (a) abrasive wear on cutting disc, (b) plastic deformations in soil and damage/fragmentation in hard rock, and (c) the cutting forces acting on the disc (The vertical gray line represents the soil-rock interface).